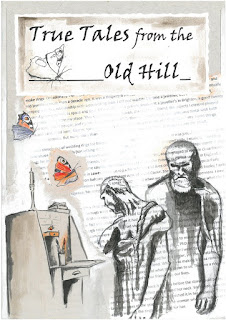 Catherine Smith's The New Cockaigne (£5) and Clare Best's Cell (£10) would make an excellent present for the poetry lover in your life.

Posted by Sascha Loske at 12:58 No comments:

The Frogmore Press has recently launched two new publications.  26 November saw the launch at the Red Roaster in Brighton of Clare Best’s Cell, which has been variously described as a ‘not-quite-pamphlet’ and a ‘folding artefact’. Cell is a poem in twelve sections with illustrations in charcoal by Michaela Ridgway. It tells the story of Christine Carpenter, a fourteen year old who took vows of silent devotion in 1329 and was enclosed in a cell in St James’ Church, Shere.

Beautifully designed by Katy Mawhood, Cell has been described by Helena Nelson as ‘a potent tale for our times’. It is a unique publication, available exclusively from The Frogmore Press, 21 Mildmay Road, Lewes BN7 1PJ at £10.00 per copy.

On 1 December True Tales from the Old Hill, the anthology of life writing published in collaboration with the Centre for LifeHistory and Life Writing Research at the University of Sussex, enjoyed a second outing at the Elephant and Castle in Lewes. Inspired by Paul Auster’s True Tales of American Life and edited by Rachel Cole and Jeremy Page with Katie Leacock and Sally Willow, the anthology includes more than fifty ‘true tales’ by contributors resident in or near Lewes, many of them – Mikey Cuddihy, Beth Miller, Minoli Salgado and Janet Sutherland among them – familiar names.

True Tales from the Old Hill is available post free from The Frogmore Press also at £10.00 per copy.

Posted by Sascha Loske at 16:10 No comments:

Autumn pickings from the Frogmore Press

True Tales from the Old Hill, an anthology of life writing by residents of Lewes, East Sussex, was launched at the University of Sussex on October 20th. It was published in collaboration with the Centre for Life History and Life Writing Research. The cover art is by Paris-based artist Eva Bodinet and inspired by several stories in the anthology.

The volume is edited by Rachel Cole and Jeremy Page, with Katie Leacock and Sally Willow. It features strange but true tales by more than forty writers, including Clare Best, Caroline Clark, Mikey Cuddihy, Minoli Salgado and Janet Sutherland. Copies are available post-free from The Frogmore Press, 21 Mildmay Road, Lewes BN7 1PJ at £10.


The autumn edition of The Frogmore Papers (No. 86) also appeared. Poets in the issue include Sharon Black, Sam Gardiner, D A Prince, Kay Syrad adn Lorna Thorpe. All poems shortlisted by John McCullough for this year's Frogmore Poetry Prize, won by Sarah Barr, also feature. And there is prose from Jane McLaughlin, whose short story Same as Ever inspired Peter Cole's much admired cover featuring a naked man sporting a flower pot on his head, three snow leopards and a wheelbarrow. 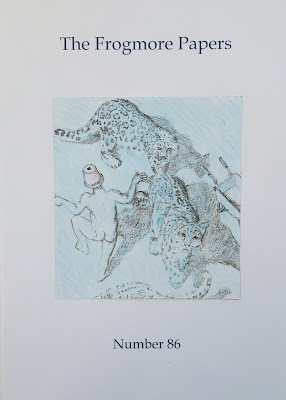 A new edition of morphrog is scheduled to go live in January.
The deadline for submissions to the 30th Frogmore Poetry Prize, adjudicated by Catherine Smith, is 31 May 2016.
Posted by Sascha Loske at 14:09 No comments:

On Wednesday, 14 October the 52nd issue of South Poetry Magazine will be launched at Cluny Hall (7.30pm. £3). The contents of this issue were selected by Frogmore writers Robin Houghton and Jeremy Page, who will both read alongside other contributors.


On Thursday 15 October Frogmore poets Caroline Clark and Matthew Stewart will read their poetry at Needlewriters at the Needlemakers. Their readings will bookend a reading by Ros Barber from her new novel Devotion (7.45pm, £5). Books by all three writers will be available on the day from Skylark bookshop in Lewes.

Posted by Sascha Loske at 14:13 No comments:

Sponsored by the Frogmore Press 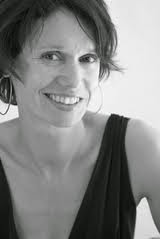 In 2016 the Frogmore Prize will be awarded for the 30th consecutive year, and we are delighted that Catherine Smith has agreed to adjudicate. Catherine will read all entries for the Prize with a view to selecting the winner of the 2016 Prize, who will join a distinguished list that includes Sharon Black, Tobias Hill, Mario Petrucci and Lesley Saunders. Four poets have achieved the extraordinary in winning the Prize on more than one occasion. They are Caroline Price (three times), and John Latham, Emily Wills and Howard Wright (twice each).

All shortlisted poems will be published in the September 2016 issue of The Frogmore Papers (number 88) and on the Frogmore Press website. The entry fee remains unchanged at £3.00 per poem, and the Prize fund totals 375 guineas.

This year’s Prize-winning poem by Sarah Barr and the other shortlisted poems will all appear in number 86 of The Frogmore Papers next month.

Adjudicator:  Catherine Smith will read all poems submitted for the 30th Frogmore Poetry Prize. She is the author of three full collections of poetry: The Butcher’s Hands (2003), Lip (2007) and Otherwhere (2012), all published by Smith Doorstop. The Butcher’s Hands won the Aldeburgh/Jerwood Prize for Best First Collection, and Lip was shortlisted for the 2008 Forward Prize for Best Collection. The Frogmore Press published The New Cockaigne, a ‘rollicking ballad of revolution and fantastical carnal excess’ in 2014.

1     Poems must be in English, unpublished, and not accepted for future publication.
2     Poems should be typed and no longer than forty lines.
3     Any number of poems may be entered on payment of the appropriate fee of £3 per poem.   Cheques and postal orders should be made payable to The Frogmore Press.
4     The following methods of payment are acceptable: cheque drawn on UK bank; British postal order; sterling.
5     Each poem should be on a separate sheet, which should not include the name of the author.
6     The author’s name and address should be provided on an accompanying sheet of paper.
7     The winner, runners-up and shortlisted poets will be notified by post. All shortlisted poems will appear in number 88 of The Frogmore Papers (September 2016), which will be available at £5.00 from the address below, and on the Frogmore Press website.
8     To receive a copy of the results, please enclose an s.a.e. marked ‘Results’.
9     Poems cannot be returned.
10   Closing date for submissions: 31 May 2016.
11   Copyright of all poems submitted will remain with the authors but the Frogmore Press reserves the right to publish all shortlisted poems.
12   The adjudicator’s decision will be final and no correspondence can be entered into.
13   Entries should be sent to: The Frogmore Press, , Lewes, East Sussex BN7 1PJ.


14   The submission of poems for the Prize will be taken as indicating acceptance of the above conditions.
Posted by Sascha Loske at 07:04 No comments:

September will see the publication of the 86th edition of The Frogmore Papers, featuring all the poems shortlisted for this year’s Frogmore Poetry Prize, including winner Sarah Barr and runners-up Peter Marshall and Frances Corkey Thompson. The issue will also feature some of the last unpublished poems by Tom Duddy, who died in 2012.

Later in the autumn True Tales from the Old Hill, an anthology of life writing edited by Rachel Cole and Jeremy Page and published in collaboration with the Centre for Life History and Life Writing Research at the University of Sussex, will be launched. Further details will follow.
Posted by Sascha Loske at 13:16 No comments:

The Frogmore Poetry Prize for 2015 has been awarded to Dorset poet Sarah Barr by adjudicator John McCullough. 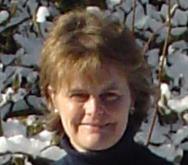 Of her Prize-winning poem McCullough says: 'January' uses form to create and complicate meaning in highly suggestive ways. The disjunctions between its stanzas evoke the sudden leaps of a mind actively thinking, the white spaces inviting us to imagine what's going on beneath the clipped surface of the language. Its first line is arresting and it draws much from ostensibly simple phrasing ('Perhaps it's natural...'). It carries on unfolding inside the reader once we have finished: a magnificent achievement and a worthy winner.’

First runner-up was Peter Marshall from Basingstoke, who is a previous winner of the Prize (in 2007) and second runner-up was Frances Corkey Thompson from Ilfracombe, who has previously been short-listed for the Prize (in 2013). Next year will see the Frogmore Prize, which was established by the Frogmore Foundation in 1987, awarded for the 30th consecutive year.
Posted by Sascha Loske at 14:05 No comments:

Catherine Smith's recent Frogmore Press pamphlet The New Cockaigne has received a glowing review from Scott Pack at Me And My Big Mouth:

"A funny and thought-provoking prose poem in which a new nihilist republic is declared, group sex is encouraged, pies rain from the sky and farting becomes a comeptitive sport. Made me chuckle more than once."

Copies are available for only £5 (post free) from The Frogmore Press.

Autumn will see two further Frogmore publications: Cell by Clare Best and True Tales from the Old Hill, an anthology of life writing edited by Rachel Cole and Jeremy Page, in collaboration with the Centre for Life History and Life Writing Research at the University of Sussex.
Posted by Sascha Loske at 02:59 No comments:

The deadline for submissions to this year's (29th) Frogmore Poetry Prize is fast approaching (31 May 2015). Adjudicator John McCullough, author of the highly acclaimed The Frost Fairs, will read all the entries and the entire shortlist of ten will be published in the September issue of The Frogmore Papers. 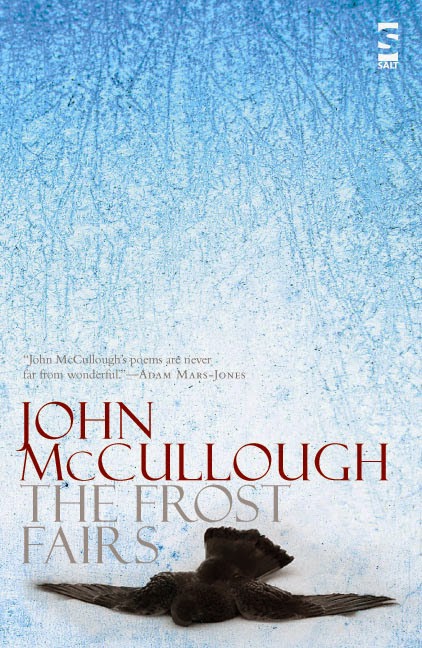 
Full detail of how to enter (no entry form required) can be found at http://www.frogmorepress.co.uk/

Posted by Sascha Loske at 02:55 No comments:

The Needlewriters anthology launched at Needlemakers in Lewes, and other news

The latest Frogmore publication The Needlewriters was launched at the Needlemakers in Lewes on 26 March 2015. The anthology contains poetry and prose by writers from Kent and Sussex who have read at the Needlewriters' quarterly events since 2008, including Peter Abbs, John Agard, Sasha Dugdale, Vanessa Gebbie, Lee Harwood, VG Lee, Patricia McCarthy, Grace Nichols, Nicholas Royle, Joe Sheerin, Catherine Smith, Lorna Thorpe, Jackie Wills and 40 others.

Also launching at the event was the online Needlewriters Companion.

Frogmore Papers editor Jeremy Page will be reading at the next Needlewriters event on 9 April with poet Judith Cair and novelist Jon Walter.

The Needlewriters anthology is available post-free from The Frogmore Press or Skylark in the Needlemakers, Lewes. Price £10.
Posted by Sascha Loske at 06:42 No comments: 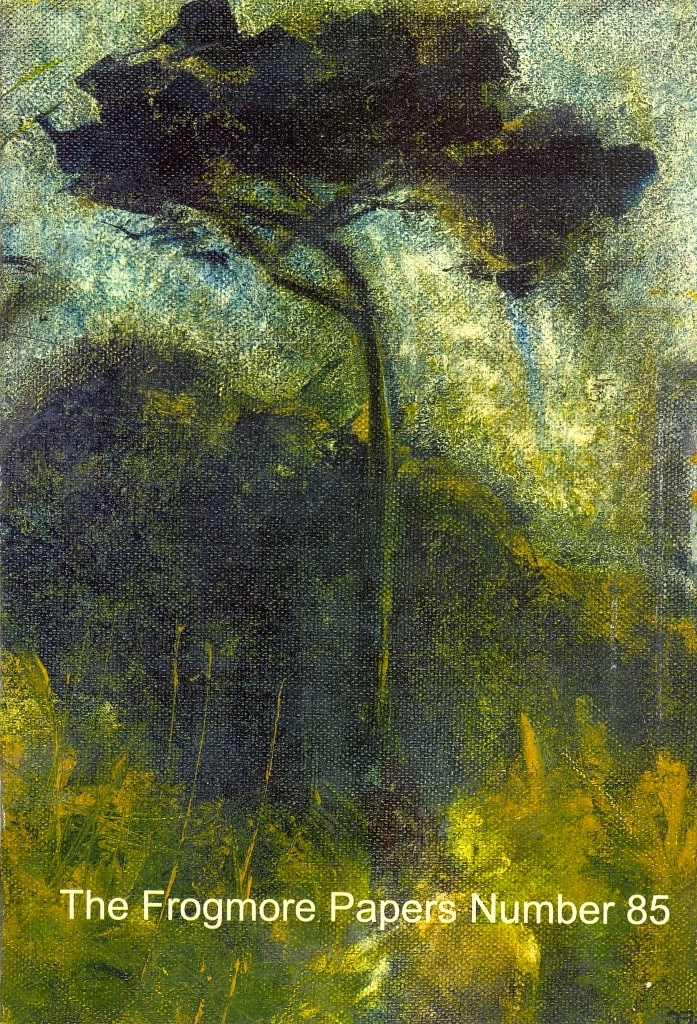 There is prose from Welsh writer Simon Howells and American Alice Wooledge Salmon, and artwork from Ukrainian Alexei Talimonov. The striking cover design is by Hythe artist Carol Lewis.

The Frogmore Papers are available post-free from The Frogmore Press, 21 Mildmay Road, Lewes BN7 1PJ (£5) or may be purchased from Skylark in the Needlemakers, Lewes, East Sussex.

A  happy new year to all friends of Frogmore.

morphrog 10 (Poetry in the Extreme) went live on New Year's Day and can be viewed here.
It features work from the following poets:


2015 promises to be a busy year on the publishing front for The Frogmore Press:

In March a substantial anthology of poetry and prose by writers who have read at Needlewriters in Lewes will be published. In early summer a new pamphlet by Clare Best will appear. And the autumn will see the publication of an anthology of life writing in collaboration with the Centre for Life History and Life Writing Research at the University of Sussex. See here for the Call for Submissions (deadline 31 March 2015).
Numbers 85 and 86 of The Frogmore Papers will appear in March and September respectively, the latter containing all poems shortlisted for this year's (29th) Frogmore Poety Prize, to be adjudicated by John McCullough.
Posted by Sascha Loske at 06:40 No comments: