In and Out of The Dark Wood 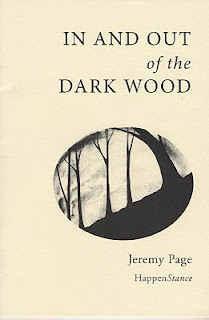 A new chapbook of poems by Jeremy Page, editor of The Frogmore Papers, has been published by HappenStance Press.
In and Out of The Dark Wood brings together poems written since the publication of his last collection The Alternative Version in 2001. Copies, which cost only £4.00, can be ordered through any good bookshop or direct and post free from HappenStance’s online shop: http://www.happenstancepress.co.uk/zencart/

Closing date for the Frogmore Poetry Prize is 31 May 2010

A reminder that the deadline for submissions for the 2010 Frogmore Poetry Prize is approaching.

The Frogmore Poetry Prize was founded in 1987 and has been awarded annually since then. The Prize money is currently two hundred guineas but the true Prize is the kudos of joining a select band of winners which includes Caroline Price, John Latham, Tobias Hill and Mario Petrucci. Many leading poets - Carole Satyamurti, Pauline Stainer, Linda France, Paul Groves, John Mole, Sophie Hannah, Elizabeth Bartlett and Susan Wicks among them - have adjudicated the Prize and all winners have been published in the pages of The Frogmore Papers.

This year's adjudicator is Stewart Conn.
Stewar Conn has lived in Edinburgh since 1977, and was the capital's inaugural poet laureate, under the title the Edinburgh Makar. His poetry has been widely anthologised and translated. Among many individual volumes are Stolen Light: Selected Poems (Bloodaxe Books, 1999) and Distances: a personal evocation of people and places (Scottish Cultural Press, 2001), and Ghosts at Cockcrow (Bloodaxe, 2005).

1 Poems must be in English, unpublished, and not accepted for future publication.
2 Poems should be typed and no longer than forty lines.
3 Any number of poems may be entered on payment of the appropriate fee of £3 per poem. Cheques and postal orders should be made payable to The Frogmore Press.
4 The following methods of payment are acceptable: cheque drawn on UK bank; British postal order; sterling.
5 Each poem should be on a separate sheet, which should not include the name of the author.
6 The author’s name and address should be provided on an accompanying sheet of paper.
7 The winner, runners-up and shortlisted poets will be notified by post. All shortlisted poems will appear in number 76 of The Frogmore Papers (September 2010)
8 To receive a copy of the results, please enclose an s.a.e. marked ‘Results’.
9 Poems cannot be returned.
10 Closing date for submissions: 31 May 2010.
11 Copyright of all poems submitted will remain with the authors but the Frogmore Press reserves the right to publish all shortlisted poems.
12 The adjudicator’s decision will be final and no correspondence can be entered into.
13 Entries should be sent to: The Frogmore Press, 21 Mildmay Road, Lewes, East Sussex BN7 1PJ.
14 The submission of poems for the Prize will be taken as indicating acceptance of the above conditions.
Posted by Sascha Loske at 13:18 No comments: