Last call for submissions for the 27th Frogmore Poetry Prize

Last call for submissions for the 27th Frogmore Poetry Prize, this year adjudicated by Stephanie Norgate. The deadline is 31st May.

Posted by Sascha Loske at 01:06 No comments:

Frogmore celebrates its 30th birthday - in Brighton, London and Folkestone

Frogmore celebrated thirty years of publishing this month with events at the New Venture Theatre, Brighton (compered by Managing Editor, Alexandra Loske) on 5 May and the Poetry Café, Betterton Street, Covent Garden (compered by Frogmore Papers editor Jeremy Page) on 15 May. Readers in Brighton – JohnMcCullough, Maria Jastrzebska, Jeremy Page and Michaela Ridgway – had the surreal experience of reading from the set of Sartre’s Huis Clos, which was mid-run at the NVT.

Readers in London – John Mackay, Abegail Morley, Jeremy Worman and Tamar Yoseloff – provided both poetry and prose between them, the evening concluding with founding editor Jeremy Page reading a short selection of favourite poems published in The Frogmore Papers down the years.

Saturday (18 May) saw the last of the celebratory events, with readings from co-founders André Evans and Jeremy Page at the Amphitheatre in Folkestone, a stone’s throw from the site of the celebrated tea-rooms where the Press was founded.

An appreciative audience heard André read from his introduction to the first issue of The Frogmore Papers and also his co-founder’s 1983 ‘Requiem for Frogmore’.  Jeremy read a poem originally commissioned by Kent Arts and Libraries for its ‘Century of Kent Writers’ project, evoking Folkestone’s unlikely associations with Charles Dickens, Samuel Beckett and Philip Larkin, before concluding his reading with a selection of Flexostructuralist poems by Bob Mitchell. Mitchell’s work was championed by the Frogmore Press in the 1980s and 1990s, culminating in the publication of the now very rare and much sought after classic Bush Klaxon Has A Body Like A Trio Sonata in 1991. 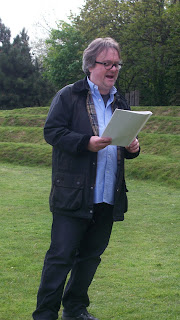 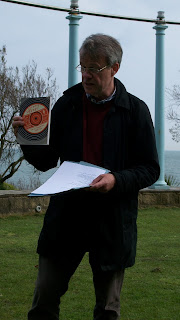 Coming next from Frogmore:

On 1 July issue 7 of morphrog, Frogmore’s online journal, will go live.
In July, the results of the 27th Frogmore Poetry Prize, adjudicated by Stephanie Norgate, will be announced.  The deadline for entries is 31 May.
In September number 82 of The Frogmore Papers will be published.  The issue will feature the Frogmore Prize shortlist and a cover by Rye-based artist Leah Fusco.

Posted by Sascha Loske at 11:08 No comments:

Frogmore poet at the Mayfield Fringe Festival on Sunday (12 May)

Frogmore Poets Clare Best, Kim Lasky, Jeremy Page and Marek Urbanowicz will be reading at the Mayfield Fringe Festival on Sunday (12 May) ahead of the publication of the ‘Exiles’ double issue of Agenda.
Other readers will be June English and Agenda editor, Patricia McCarthy, who will read her National Poetry Prize winning poem. 6.30 at The Middle House, Mayfield.
Details here:
http://www.mayfieldfringe.co.uk/Mayfield_Fringe_Festival/Details_of_Events_%26_Artists.html

Posted by Sascha Loske at 06:29 No comments: