just a couple of notes on writers associated with the Frogmore Press.

Jeremy Page, co-founder of the Frogmore Press and editor of The Frogmore Papers, was one of the authors reading at this year's Quick Fiction at the University of Sussex. The event was organised by Nicholas Royle and supported by independent publisher Myriad Editions. His very short short story 'Chaos Theory on a Bad Gravy Day' can be found here. (You need to scroll down a bit.) 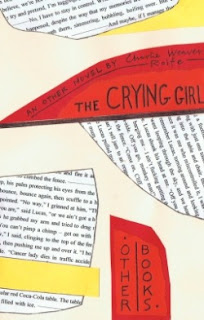 Charlie Rolfe, whose new novel The Crying Girl is reviewed in the latest issue of Frogmore (no. 75, Spring 2010) has alerted me to his website Made-up Co., which features work by a collective of self published writers and poets based in Brighton. It is in its infant stage but well worth supporting and having a look at:

Keep on reading and have a lovely weekend,

Posted by Sascha Loske at 06:53 No comments:

Frogmore Papers Issue 75 is out! 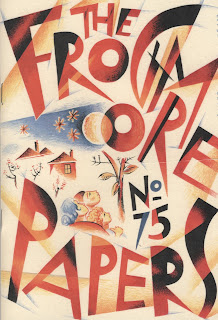 The spring 2010 edition of The Frogmore Papers (number 75) is now out, and subscribers and contributors should receive their copies within the next two weeks. Copies can be ordered by sending a cheque for £5.00 payable to ‘The Frogmore Press’. The new Papers sport a stunning cover from Neil Gower and contain poems by Frogmore stalwarts Peter Carpenter, Michael Curtis, Edna Eglinton, Robert Etty, Sam Gardiner, Desmond Graham, Caroline Price, Alex Smith and Michael Swan alongside new work from the likes of Martyn Crucefix, Katrina Naomi and Martin Reed, prose from Peter Gilmour, Jaki McCarrick, Maria McCarthy and Richard Todd, and artwork from Donald Stuart and Alexey Talimonov. A fifty-two page feast for the eyes and mind!
Posted by Sascha Loske at 09:22 No comments: