Frogmore Papers No. 78 is out now! 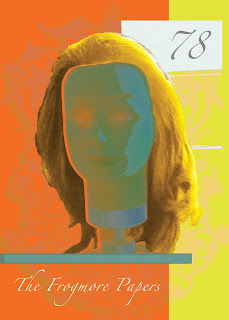 This issue includes the winning and shortlisted poems from this year's Frogmore Prize, adjudicated by Tamar Yoseloff. This year's (25th) Prize was won by Sharon Black.

Among the contributors to this issue:

Caroline Ashley and her poetry were profiled in Contemporary Review (Oxford) last year.
William Bedford’s selected poems are published as Collecting Bottle Tops.
Kaddy Benyon was shortlisted for the inaugural Picador Poetry Prize.
Sharon Black's poems have appeared in various magazines and her first full collection To Know Bedrock is due to be published by Pindrop Press.
John Brantingham has been featured on Garrison Keillor’s Writer’s Almanac and nominated for a Pushcart Prize. He lives in California.
Miles Cain is a writer, songwriter and storyteller based in York. His novel A Song for Nicky Moon was shortlisted in the Times/Chicken House children’s novel competition.
Tim Cresswell is a Professor of Cultural Geography at Royal Holloway, University of London.
Michael Cunningham’s second collection About Healing was published by Driftwood in 2004.
Michael Curtis is the author of numerous collections of poems. Melnais Suns, Latvian translations of his poetry and prose, was published last year.
Ryan J Davidson has lived in Japan and New York, and is currently in Glasgow, where he is working on a PhD on the influence of William Blake on Walt Whitman.
Suzanna Fitzpatrick's poems are widely published and her work has been commended in several national competitions.
Nancy Gaffield is studying for a doctorate at the University of Kent. Tokaido Road is shortlisted for this year’s Felix Dennis (Forward) Prize for Best First Collection.
Joy Howard is the author of Exit Moonshine (Grey Hen Press 2009) and Refurbishment (Ward Wood 2011).
Kim Lasky is a poet and teacher, author of What It Means To Fall (Tall Lighthouse Press 2006).
Richie McCaffery, Newcastle-born, received a 2009 Scottish Arts Council Edwin Morgan poetry bursary.
Helen Overell’s collection Inscapes and Horizons is published by St Albert’s Press.
Moya Pacey completed an MA in Creative and Life Writing at Goldsmiths. Her collection The Wardrobe is published by Ginninderra Press.
Andrew Pidoux is the author of Year of the Lion (Salt).
Donna Pucciani lives in the Chicago area but pays frequent visits to England. She has published four collections of poems.
Lesley Saunders, author of several books and pamphlets of poetry, has held
various poetry residencies, including at Acton Court, Iron Acton, a Tudor house built for Henry VIII and Anne Boleyn.
Lorna Thorpe’s second collection of poetry is due from Arc in November.
Emily Wills has had two collections published by The Rialto.
Jennifer Wong is based in London. Her collection Summer Cicadas was published by Chameleon Press.
Jeremy Worman’s autobiographical collection of short stories about London Fragmented is reviewed in this issue.
Posted by Sascha Loske at 13:31 No comments:

Excisions may be ordered from Waterloo Press (£10.00) from 16th September