The Frogmore Press has a shiny new website! We will mothball this blog and include news, calls for submissions and other announcements on the website: 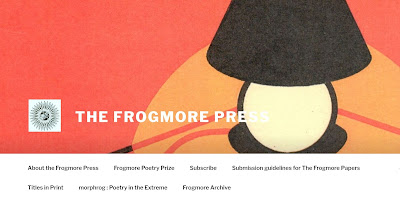 Posted by Sascha Loske at 11:48 No comments:

Call for submissions: Pale Fire - New writings on the Moon

The Frogmore Press invites submissions of poetry and short prose on the subject of the Moon for an anthology titled Pale Fire - New writings on the Moon.  It will be published in 2019, to coincide with the 50th anniversary of the first manned moon landing.

Submission details:
Please send up to three poems and/or one piece of short prose in hard copy to The Frogmore Press, "Moon", 21 Mildmay Road, Lewes BN7 1PJ, or email a word document with your name and contact details clearly on every page to Alexbythesea@hotmail.com . If submitting by letter, please include a stamped and addressed envelope (SAE).
Submission deadline: 30th September 2018
Posted by Sascha Loske at 06:32 No comments:

Frogmore poets Jeremy Page, Kitty Coles and Michael Bartholomew-Biggs will read at Lumen, King’s Cross, London, on Tuesday 19 September 2017. The event starts at 7.00 pm and entry is £5.00. All proceeds go to cold weather shelters for the homeless.
Full details at: https://camdenlumen.wordpress.com/2017/09/06/lumen-poetry-series-tuesday-19th-september/

Janet Sutherland will adjudicate the 2018 Frogmore Poetry Prize. Janet is the author of three collections from Shearsman, most recently Bone Monkey. Her fourth is due next year.
Submissions are invited for the January edition of morphrog, ‘poetry in the extreme’. Up to six poems may be sent in a single Word file to: morphrog@gmail.com The current edition can be viewed at: http://www.morphrog.com/

And finally, the 90th edition of The Frogmore Papers will be published later this month. The issue will feature poetry from Maggie Butt, Jonathan Edwards, Abegail Morley, Michael Swan, Howard Wright and others, prose by Michael Loveday and Kevin Tosca and artwork by Dee Sunshine. All the poems shortlisted for this year’s Frogmore Prize, including Emily Wills’ winning poem, are also published in the issue. Copies will be available for £5.00 (post free) from: The Frogmore Press, 21 Mildmay Road, Lewes BN7 1PJ.
Posted by Sascha Loske at 15:01 1 comment:

Number 15 of morphrog, Frogmore's online journal of ‘poetry in the extreme’ is now live

Number 15 of morphrog, the online journal promising ‘poetry in the extreme’ and published by the Frogmore Press, is now live at http://www.morphrog.com

The issue contains new poetry from the customary eclectic range of authors: American poet Gale Acuff, author of The Story of My Lives (2008), who has taught university English in the US and China as well as on the Palestinian West Bank; widely published poet and poetry editor of London Grip Michael Bartholomew-Biggs; multiple Pushcart prize nominee Lana Bella; Natalie Crick, whose poem ‘Sunday School’ was nominated for this year’s Pushcart Prize; recent runner-up for the Frogmore Prize Nicola Daly; Antony Johae, author of Poems of the East; Missouri poet Donal Mahoney; priest, mediator, trainer and poet Chris McDermott; Ian C Smith, author of wonder sadness madness, who lives in the Gippsland Lakes area of Victoria, Australia; poet, sound artist and graphic artist Lawrence Upton; and Austrian writer Theresa Vogrin. At a time of increasing global uncertainty, the international flavour of this issue offers a wide range of perspectives on and insights into the unprecedented circumstances we find ourselves in.

The winner of the 31st Frogmore Poetry Prize is...

This is the third time Emily has won the Prize: her previous successes were in 2012 (awarded by Janet Sutherland) and 2013 (awarded by Stephanie Norgate). She joins the distinguished company of Caroline Price, another three-times winner, and John Latham and Howard Wright, who have both won twice. Emily works as a GP in Gloucestershire and her latest collection is Unmapped (The Rialto, 2014).

Maggie Butt says the winning poem, ‘Her Labour’s Fruits’, ‘leapt out at me from the first reading. The first line ‘the buttery cool of milk just on the turn,’ held promise which was fulfilled over and over again with sensual images, tastes and colours. I was immersed and then led into the slow reveal of the viewpoint of the speaker, the accomplished way the poet trusts the reader to complete the story.’

Runner-up Vaughan Pilikian, a film-maker and Sanskrit scholar, was a candidate for the Oxford Professorship of Poetry in 2010. His 15-line, single-sentence poem ‘May It Be You’ uses vivid imagery ‘fluted/in plainsong,/ shuttled in the blood,’ musical repetition and religious allusions to create a multi-faceted and jewel-like love poem.’ Maggie advises: ‘Read it to someone you love!’

All shortlisted poems will be published in the September issue of The Frogmore Papers (number 90), available from The Frogmore Press for only £5.00.
Posted by Sascha Loske at 14:15 No comments:

The Frogmore Press invites you to a very special poetry and prose event at the Constable and Brighton exhibition at Brighton Museum. 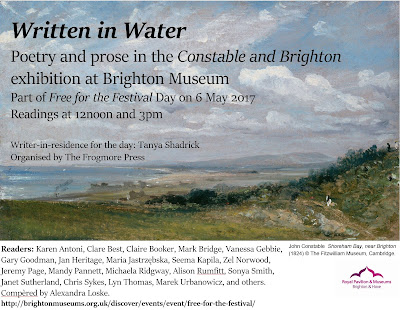 Written in Water (a nod to Keats' epitaph) will take place on Saturday 6 May 2017, during the Free for the Festival Day at the Brighton Museum. It coincides with the beginning of the Brighton Festival, which this year is directed by poet Kate Tempest. The themes of the readings will be loosely connected to the Constable exhibition: water, wind, weather, storms, clouds, the Sussex coast and Downs, the sea, Brighton, landscape painting, the Romantic Age, Brighton as a home etc.

The event will be compèred by Frogmore Press Managing Editor Alexandra Loske, who is also a curator at the Royal Pavilion and Brighton Museums. There will be two readings, one at 12noon and one at 3pm.

In addition, Tanya Shadrick, creator of Wild Patience Scrolls and co-editor of Frogmore's latest anthology Watermarks: Writing by Lido Lovers and Wild Swimmers will be there as writer-in-residence for the day.

There is no need to  book, but the museum is likely to get very busy and there is a strict limit on people allowed in the Constable galleries at any one time, so come early to avoid disappointment.

Here is the line-up of poets/writers:

Posted by Sascha Loske at 13:27 No comments:

The deadline for entries to this year's Frogmore Poetry Prize is 31 May.

Maggie Butt, the adjudicator, will read all entries and the winner will receive 250 guineas and a two-year subscription to The Frogmore Papers. All shortlisted poems will be published in number 90 and on the Frogmore Press website.

Posted by Sascha Loske at 06:55 No comments: